Review: Pokémon Sword & Shield – The Isle of Armor – A New Wild Area Worthy Of Your Interest 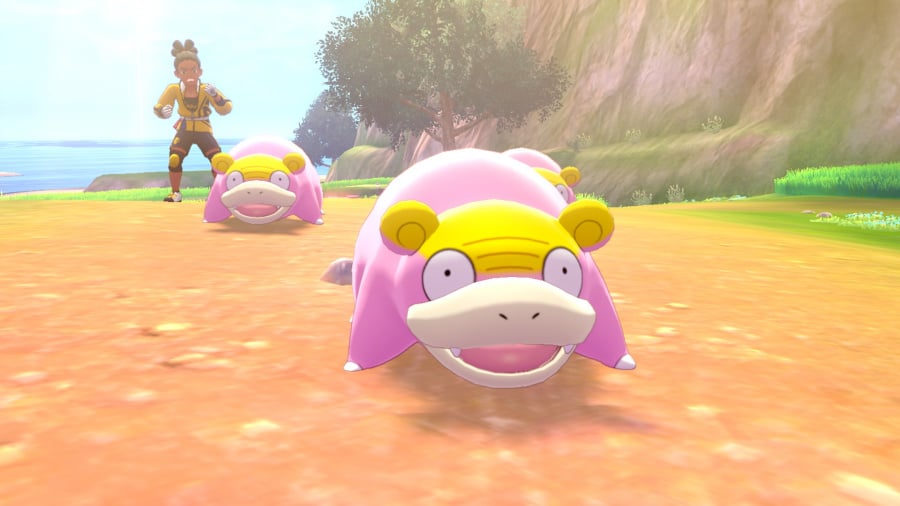 Whenever a series attempts DLC for the first time, you’re sure to find a select few individuals pining for the olden days when you got a whole game in a single package – conveniently forgetting the fact that Street Fighter II had no less than seven different iterations – but if a game sells well and there’s enough hunger for more of the same, DLC definitely has its place. Coincidentally, this is the first time a mainline Pokémon game has attempted to slap on a fresh coat of content, so does it cut the mustard?

The Isle of Armor starts off fairly simply; as soon as you’ve paid for and downloaded the update required to play it, you’ll be told that a new destination has opened allowing you to jet off to the titular isle via rail and then trained bird. You’ll bump into your rival as well, who will be either Klara, the Poison-type trainer, or Avery, the Psychic-type trainer, depending on if you’re playing Pokémon Sword or Shield respectively.

Let’s get this out of the way quickly; although it’s not something of any major consequence, we found both of these characters to be really quite irritating. A lot of their dialogue is self-narrative written in what can only be described as a ludicrously hammy fashion. They’ll taunt you, belittle you, constantly use puns based around their respective typing choice, and yet still exclaim bewilderment when you beat them despite them only having 3 Pokémon.

After arriving on the Isle, you’ll be tasked with heading over to the Dojo, where you’re meet the rest of the cast of characters that are (thankfully) much less insufferable. Mustard, the dojo master, is a kindly old man with some quirky puns of his own, but his attempts are actually endearing compared to the other two. His wife Honey (ha, Honey and Mustard) is also a nicely-written character who’s homely, understanding and only wants the best for everyone. Simple characters with distinct personalities are much more enjoyable in our book.

These are the dudes and dudettes who will make up the structure of the story side of this DLC package. You’ll start off by having to run about after three exceptionally fast Slowpoke who have stolen a uniform and are now belting it around the isle at Mach 20. The weaving and avoiding other Pokémon whilst trying to keep up with these genuinely tough-to-catch critters was a surprising breath of fresh air; it reminded us somewhat of chasing after the members of the Bombers Secret Society of Justice in The Legend of Zelda: Majora’s Mask, and really helped to break up what is so often usually a battle-a-thon in Pokémon gameplay. It’s not revolutionary, but it’s fun, and that’s what counts.

You’ll be tasked with various other missions as well, all resulting in getting your mitts on Kubfu, the larval form of the new legendary Pokémon Urshifu. We have to say that we were surprised how quickly this questline was over, beating it in what really was only a couple of hours. Admittedly that was without exploring all that much of the island or stopping to catch any of the newly returning Pokémon that can be found, but even so, this DLC isn’t heavy on the narrative, to say the least. What it does offer is enjoyable though, and we never felt that it dragged at any point.

So the real meat and potatoes of this affair is the isle itself, which is supposedly based on the Isle of Man. This is often touted as a new ‘Wild Area’, and whilst it’s certainly not inaccurate to call it such, we feel it doesn’t really do the environment justice to just leave it at that. What we have here – in contrast to the Wild Area’s vast open landscapes – is a series of concentrated, tailored biomes that feel much more intricate and carefully-planned. You’ve got a desert (somehow), various caves, expansive oceans filled with terrifyingly fast Sharpedo, a properly-sized Wailord, and even wetlands which put a particularly broad smile on our soggy British faces. Dens are in endless supply for any Max Raid Battle fans, and overall there’s much more to explore as well; as nooks and crannies are plentiful, hiding all sorts of delicious items and nameless NPCs with useful talents. It also feels bigger than the Wild Area overall, although in terms of actual meterage we can’t be absolutely certain of that fact.

See also  Is It Wrong To Try To Pick Up Girls In A Dungeon? Scores 2020 Western Switch Release

One of the unsung heroes of the expansion is the Alolan Diglett minigame. After finding one just before a bridge, you’ll be able to find an additional 150 Alolan Diglett buried around the isle, waiting to be found. They’re pretty well hidden in some instances, and you’d be forgiven for running or riding right over the top of some of them, as they offer no collision to give you any kind of clue. By no means is it groundbreaking, but the process of fulfilling this task is quick and surprisingly rewarding; finding certain numbers of Diglett will net you Alolan forms of Pokémon that you might otherwise not be able to attain, and for free! It’s a genuinely fun and challenging way to give you access to these classic ‘mon without just handing them to you, and is something you certainly shouldn’t overlook.

There’s also new outfits, hairstyles, bike customisations, and even the ability to have a Pokémon from your party follow you around, as made famous in Pokémon HeartGold & SoulSilver. The latter does absolutely nothing from a mechanical point of view, but it’s very pleasing regardless – although sadly it does only work on the Isle of Armor itself and not the rest of the Galar region, for whatever reason. And before you rush to the comments, yes, you can do this with Wailord.

Technically, we’re faced with a similarly mixed bag to that of the base game. Low-resolution textures are common throughout the landscape, and frame rate issues continue to be noticeable when biking through populated areas. Overall, it does look prettier than the basic Wild Area, if only for its more interesting geometry, but it’s clear the visual limitations present before still have not been overcome.

The Isle of Armor is a lovely addition to the base Pokémon Sword & Shield games, bringing in far more new features to tickle hardcore fans than we initially expected. On the downside, it’s a little shy on narrative-driven content and is really all about the isle and its Pokémon inhabitants. Still, while we would certainly have liked to have seen more story-based gameplay, what’s on offer is still excellent, and offers dedicated fans of the series an awful lot to explore and do. If you loved the Wild Area in Sword and Shield and want more of that, we can safely say you’ll get a real kick out of this.

Call of Duty Pioneer PC review: Can a budget gaming rig handle it?

Flipkart Big Dussehra 2022 promotion dates announced: Everything you can expect

‘So, proud of you’: Suryakumar Yadav shares pictures after century of Irani Cup batsmen