The charging socket on Ford Motor Company’s electric Mustang Mach-E vehicle is seen during a photo shoot at a studio in Warren, Michigan

That’s on top of a supply chain already plagued by the COVID-19 pandemic and a global chip shortage.

This year could mark the first year-over-year increase in the average price of lithium-ion batteries, he said.

The conflict in Ukraine has only raised the stakes, pushing nickel and aluminum prices to record highs on Monday amid growing concerns that exports from top producer Russia could be disrupted. Lithium prices have also risen, more than doubling since the end of the year, as supply is insufficient to meet growing demand.

Russia’s largest miner, Nornickel, produces about 20 percent of the world’s high-purity grade 1 nickel, which is used in electric vehicle batteries, according to Benchmark Mineral Intelligence. Russia is also a big supplier of aluminum used in batteries. 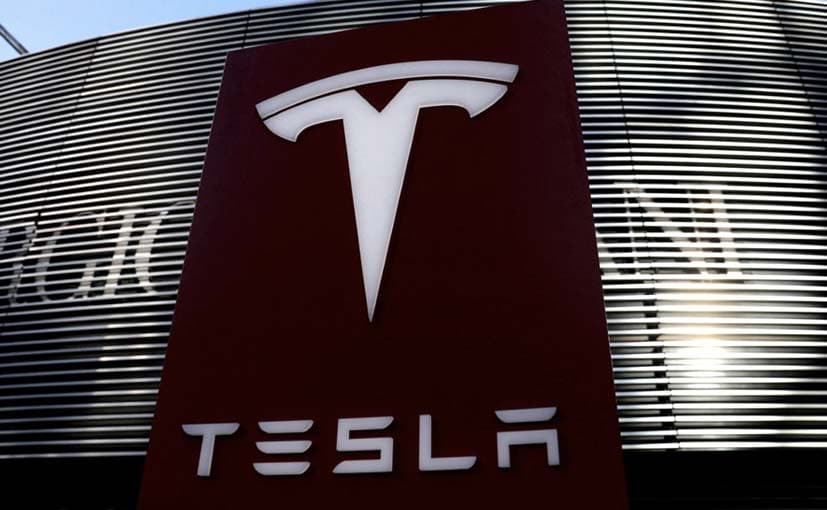 The logo of electric car maker Tesla is seen near a shopping mall in Beijing, China

To be sure, Monday’s jump in oil prices to their highest levels since 2008 could act as a counterbalance, spurring more demand for electric vehicles after years of growing demand for gas-guzzling SUVs and pickups. great interest.

Rising EV prices (marked by Tesla and startup Rivian Automotive over the past year) are important because mainstream consumers won’t pay a huge premium for a technology that many have not yet fully embraced.

The average selling price for an electric vehicle in the U.S. was nearly $63,000 in January, about 35 percent higher than the overall industry average for all vehicles of just over $46,000, according to research firm Cox Automotive.

While consumers are less concerned about roadside power outages now, price remains a major concern, according to a Cox survey.

Electric vehicles accounted for about 9 percent of global car sales last year, according to the International Energy Agency, and consultancy AlixPartners expects that share to reach about 24 percent by 2030.

A 2021 OC&C Global Speedometer study of consumers in the U.S., China and other countries shows that despite lower operating costs, more than half of consumers are not prepared to pay an extra $500 for an electric vehicle.

That could put automakers in a tough spot if they want to appeal to mainstream buyers rather than the luxury customers they currently cater to.

Tesla has raised the price of its cheapest Model 3 sedan since December 2020 by 18% to $44,990 due to supply chain issues. Musk also said in January that Tesla isn’t developing the $25,000 car he promised on Battery Day 2020, saying he has too much to do on his plate.

Some U.S. dealers are taking advantage of a shortage of cars to charge more for electric vehicles, prompting warnings from automakers such as Hyundai and Ford.

Rivian last week tried to raise prices on its electric pickups and SUVs by 20% to offset higher parts costs, but those who had already placed orders backed down in the face of backlash, including a possible cancellation of sales.

Another electric vehicle startup, Lucid Group Inc, has yet to raise prices, but CFO Sherry House said in February the company is “definitely looking at prices” to offset higher supply chain costs.

In China, rising lithium prices have put pressure on makers of entry-level models such as the Great Wall Euler EV and Wuling Hongguang Mini EV, as they have less room to push higher prices, investors said.

For startups, the pressure is especially high.

“If you’re a small company, you don’t have the ability to tell your suppliers to give you a lower price,” said Brett Smith, technical director at the Center for Automotive Research.

LG Energy Solution, a supplier to Tesla and General Motors, said raw materials account for 70 or 80 percent of its battery costs.

(Reporting by Hyunjoo Jin in San Francisco, Additional reporting by Zoey Zhang in Beijing and Heekyong Yang in Seoul, Editing by Ben Klayman and Chris Reese)

(This story has not been edited by NDTV staff and was automatically generated from the syndicated feed.)